Where to Eat and Drink in Manila: 17 Bars and Restaurants to Check Out

I was born and raised in Manila.

But I’m ashamed to admit that after more than 12 years of living in New York City, I’ve become a baffled vacationer in my own country. The Manila that I left when I was in my still-youthful 20s is no longer: It’s infinitely more vibrant than it was. The city is now teeming with secret bars, world class restaurants, and an even more pulsating nightlife scene than I remember. 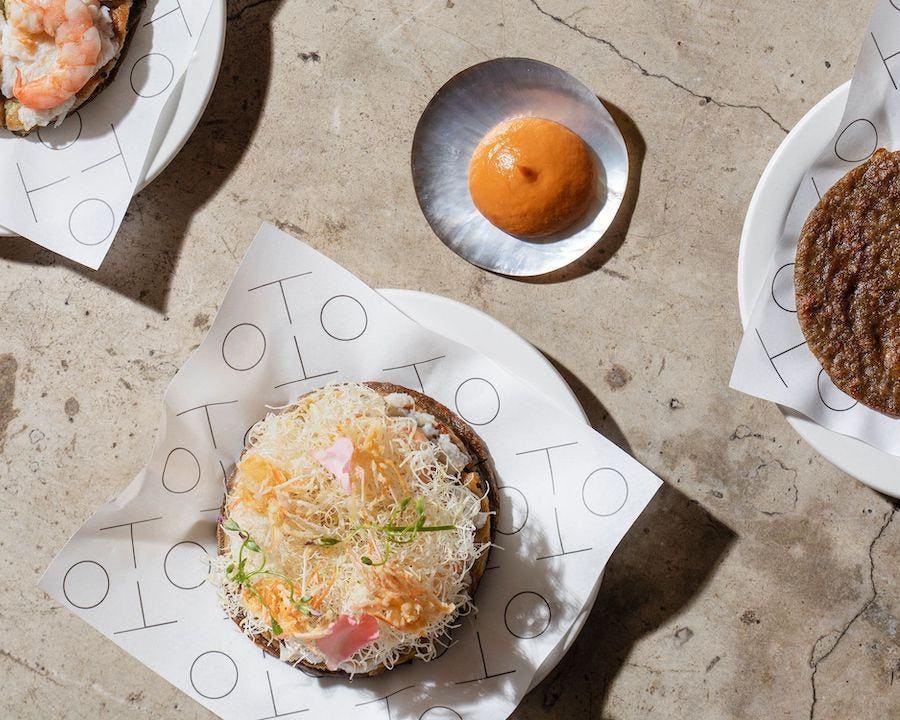 Toyo Eatery, at the Alley at Karrivin, is one of Manila’s most progressive restaurants. So much so that the World’s 50 Best Restaurants Awards named it as its ‘One to Watch’ spot for 2017. (The restaurant also has its own bakery just a few doors down. And it’s fantastic.)

Beyond that, local craft breweries have been popping up left and right. There are now liqueurs made from indigenous plants. And ’90s–style plating is nowhere to seen in fine dining establishments (thank god). I shouldn’t have been surprised. With the population at nearly 13 million strong, the city has always been in a state of constant change and flux.

And because I visit with a great degree of regularity, I decided to enlist a good friend’s help to reacquaint myself with this crazy beautiful town—with its maddening and constant carmageddon, confounding streets, and pedestrian chaos. There’s no better person than Raymond Ang—the editor, publisher, and marketing consultant who penned Manila, Manila and More, a city guide that aims to unpack and deconstruct the confusion that La Manille typically bestows on its visitors. 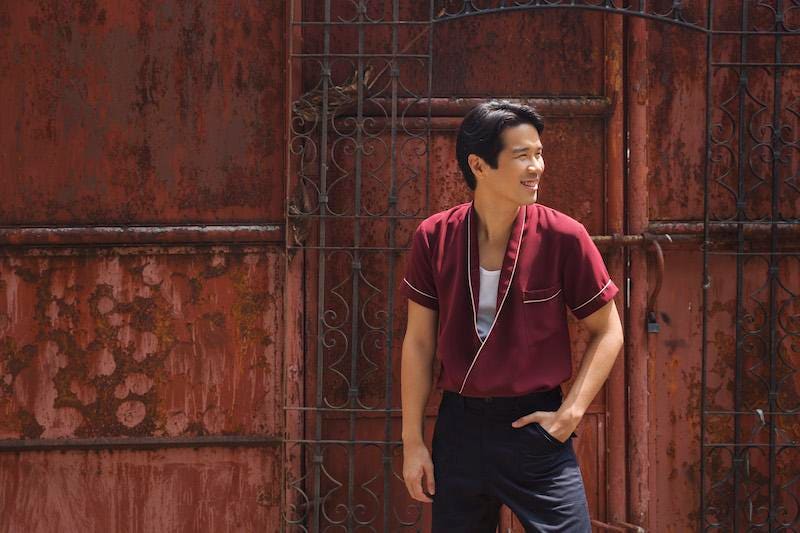 “There’s a lot of excitement around eating and drinking in Manila. If we’re a little eager, forgive us—we’ve waited a long time for our city’s dining and nightlife scenes to mature,” Ang says. “In the last few years, we’ve seen standards for restaurants and bars grow by leaps and bounds.

“Today, more than a few places enjoy international interest—landing on Asia’s 50 Best lists and enjoying inclusions in publications like Conde Nast Traveler and Bon Appétit,” Ang continues. “And while it’s nice to be recognized, you feel extra proud as a local because these guys have been churning out great work for years. It might’ve taken the Internet and globalization for Filipinos to figure out how to be globally competitive—but there’s nothing wrong with that.” 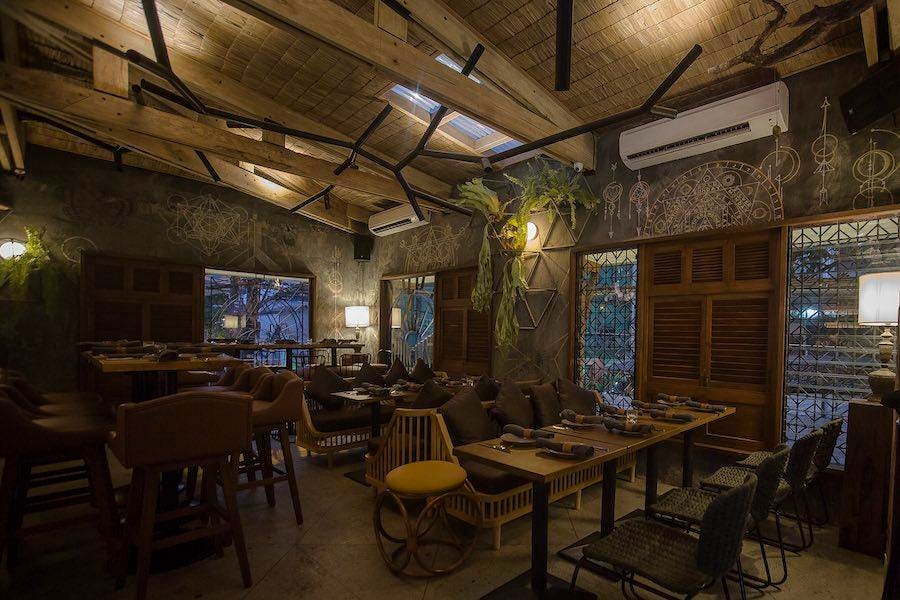 Agimat, which translates to “amulet,” is owned by trailblazing bartender Kalel Demetrio. The man is big on using all things local in addition to difficult-to-find indigenous ingredients in his cocktails.

But don’t book your plane ticket just yet. Ang recommends that you take a few dining customs into consideration. (We Filipinos take these things seriously.) “Much like most Southeast Asian countries, family-style meals are big in the Philippines,” Ang says. “It basically means ordering half the menu for the table so the whole crew gets to try everything. With Filipinos, it’s the norm—not a preference. We’re a people who know how to eat. So missing out on all that good stuff is not an option.” 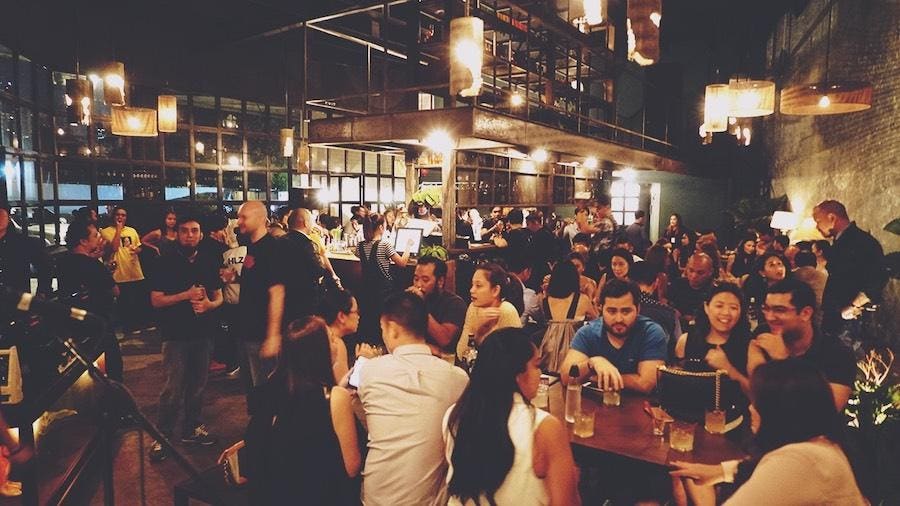 “Everybody talks about this place as Asia’s Best Female Chef 2016 Margarita Fores’ playground, where she champions the local farm-to-table movement and introduces the city to different native traditions,” Ang says. “That’s all true. But for a certain kind of diner, Grace Park is highly regarded as Manila’s best low-key dessert place. Trust me, that Eton Mess will change your life.” 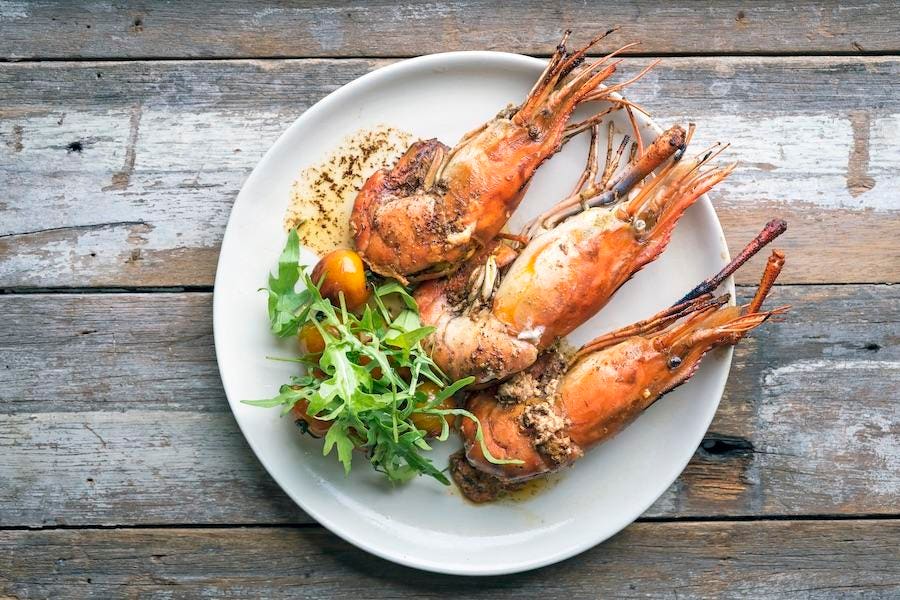 “Drinking here can sometimes feel like there’s a whole country in your glass—sometimes quite literally,” Ang says. “Agimat is a foraging bar that champions the produce of different provinces in the Philippines, which might explain the hundreds of jars and vials lining its walls and ceilings. International sites have already noticed, with Vice exclaiming that ‘Manila’s best cocktails are made with the help of shamans and rebel forces.’” 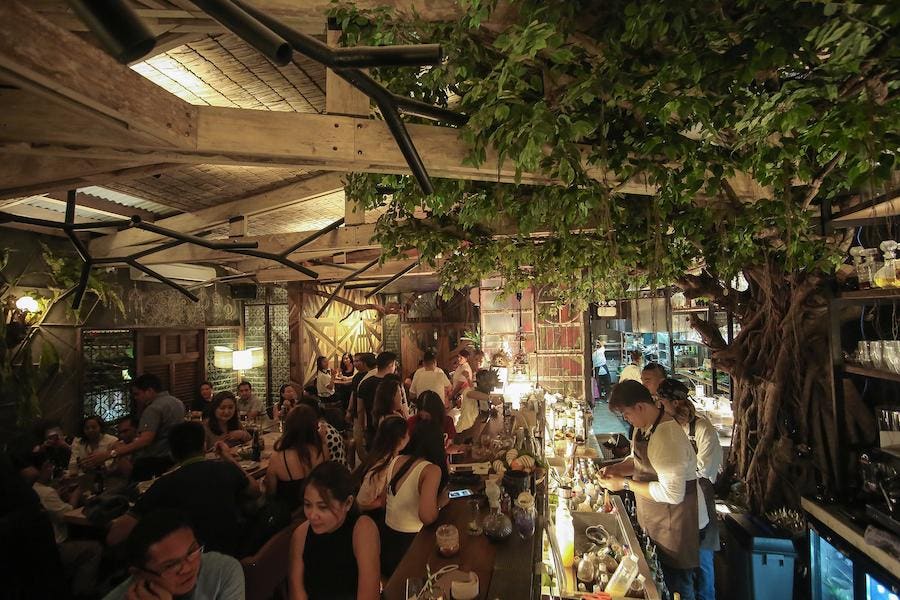 “Gab Bustos and Thea De Rivera just got engaged, but 12/10—the hip izakaya joint bordering edge of Manila’s business district—has been a testament to their commitment for years,” Ang says. “Named after their anniversary, the pair launched the restaurant in their mid 20s and have gone from strength to strength, showing increasing confidence in their roles as chef and restaurateur, respectively. This is the kind of place that gives millennials a good name—impeccable branding, precocious entrepreneurship, a carefully curated soundtrack.” 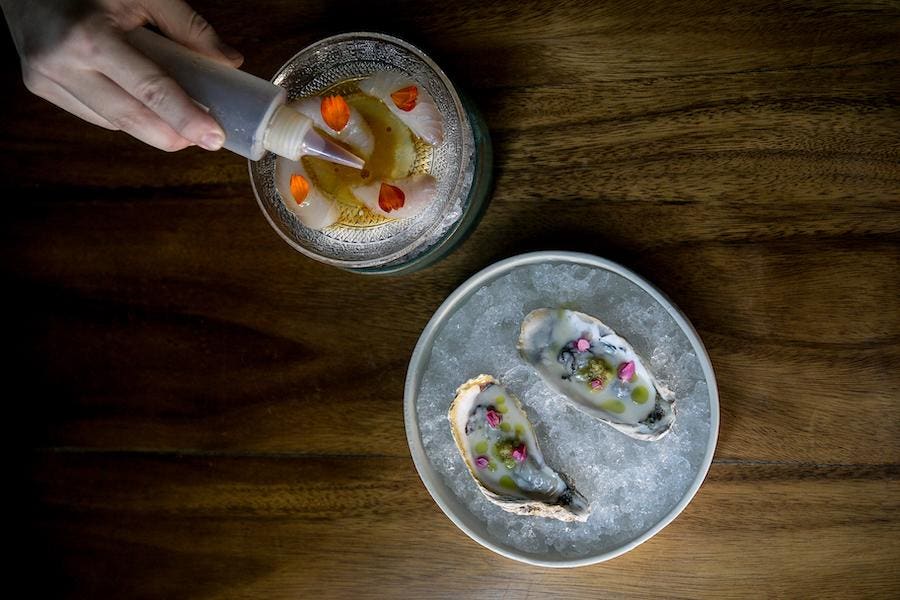 “Twice included on the Asia’s 50 Best Bars list, this send-up of Prohibition-era speakeasies does classic and signature cocktails masterfully, but its trump card might be its collection of absinthe, which happens to be the largest one in the city.” 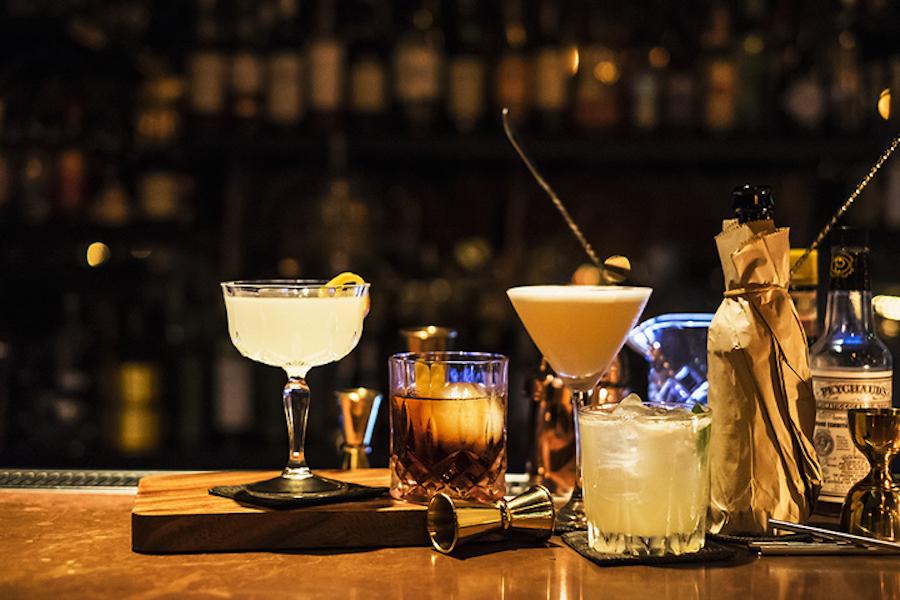 “The home of Engkanto Brewery, Polilya is a more than worthy showroom for one of the local craft beer scene’s most compelling players, with neon lights and contemporary Filipiniana design populating the interiors. For the uninitiated, start with the Four O’Clock Flight, a degustation set of four Engkanto beers of your choice.” 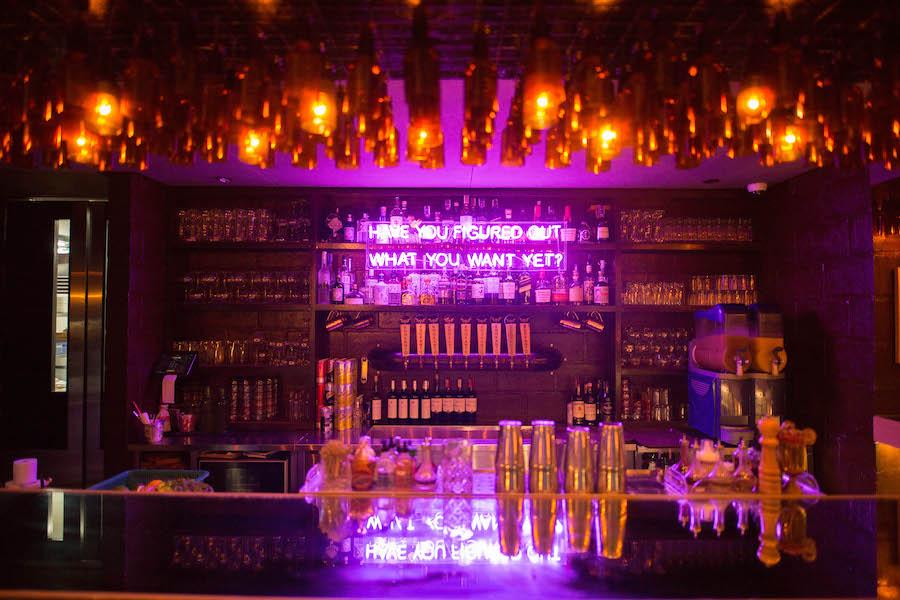 “There are a lot of great bars in the highly-globalized business districts of Makati and Fort Bonifacio but it’s a relative drought everywhere else,” Ang says. “So when the whiskey bar 78-53-86 opened in the quiet nondescript White Plains neighborhood a few years back—in a street better known for its gardening supplies—it felt like a small miracle. Think: Dim lighting, Blue Note records in the background, and some seriously good Japanese whiskies. It completed the cultural triumvirate of its owner, Jay Amante, whose art gallery (Blanc Gallery), music shop (Grey Market), and bar have gone a long way in proving the area’s cultural currency.” 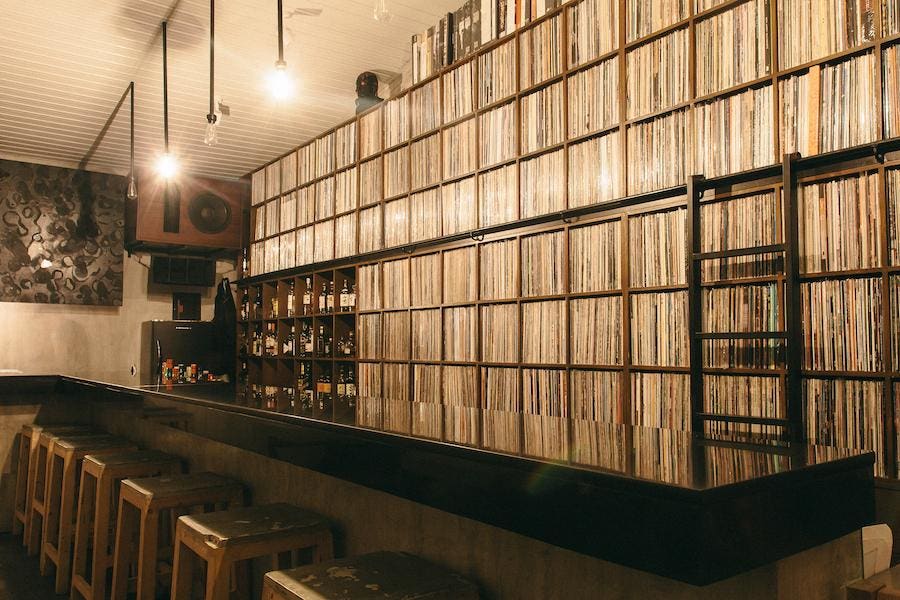 “Located in a 90-year-old building on historic Escolta Street, Fred’s Revolución is the perfect place to take in Art Deco views at sunset—preferably with a beer in hand and sinful bagnet (deep fried pork belly) on the plate,” Ang says. “The long-dormant Escolta is once again experiencing a cultural revival thanks to the new generation of artists and creatives. And the First United Building, where Fred’s resides, is the revolution’s ground zero.” 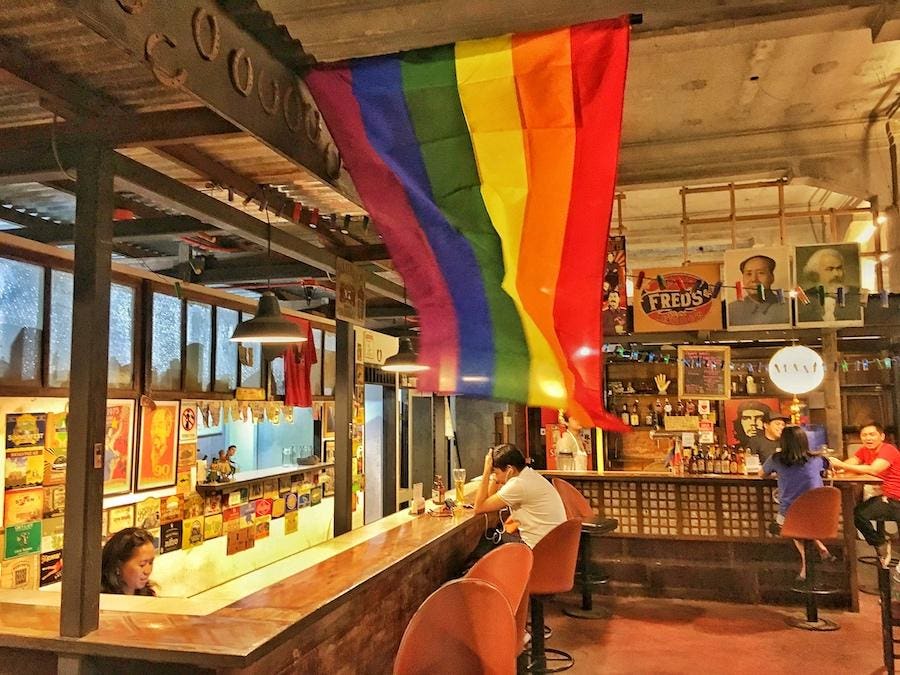 “Hotel bars are a dime a dozen in any big city. But the Hotel Bar at Pink’s, tucked inside the local branch of L.A.’s famous Pink’s Hotdogs at the luxurious Shangri-La at the Fort, reinvents the genre,” Ang says. “Manila hotel bars have been known to be coolly competent, if somewhat soulless and detached from the locales they live in. But Hotel Bar is energetic and warm. And it’s culturally connected, thanks to its Do Not Disturb night every Wednesday—where popular indie DJs spin and a Star is Born-inspired drag show comes on every now and then.” 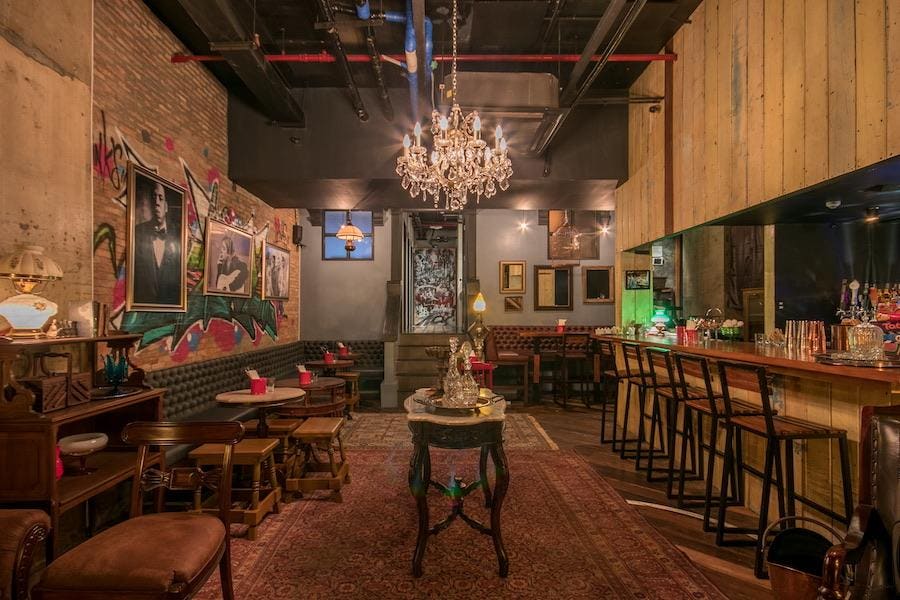 “A new addition to Makati’s bustling nightlife scene, Futurist is the smoother, more refined older sibling of Today x Future—an underground bar with a cult following in Quezon City,” Ang says. “The relatively small-scale Future has been known for its freewheeling clientele—many of whom drink and flirt alfresco, in the sweaty Manila heat, before running back inside every time a Robyn or Carly Rae Jepsen tune plays. The Future crowd graduates to Futurist, many with a bit more purchasing power tied to demanding nine-to-five jobs, but with the same affinity for a Robyn bop.” 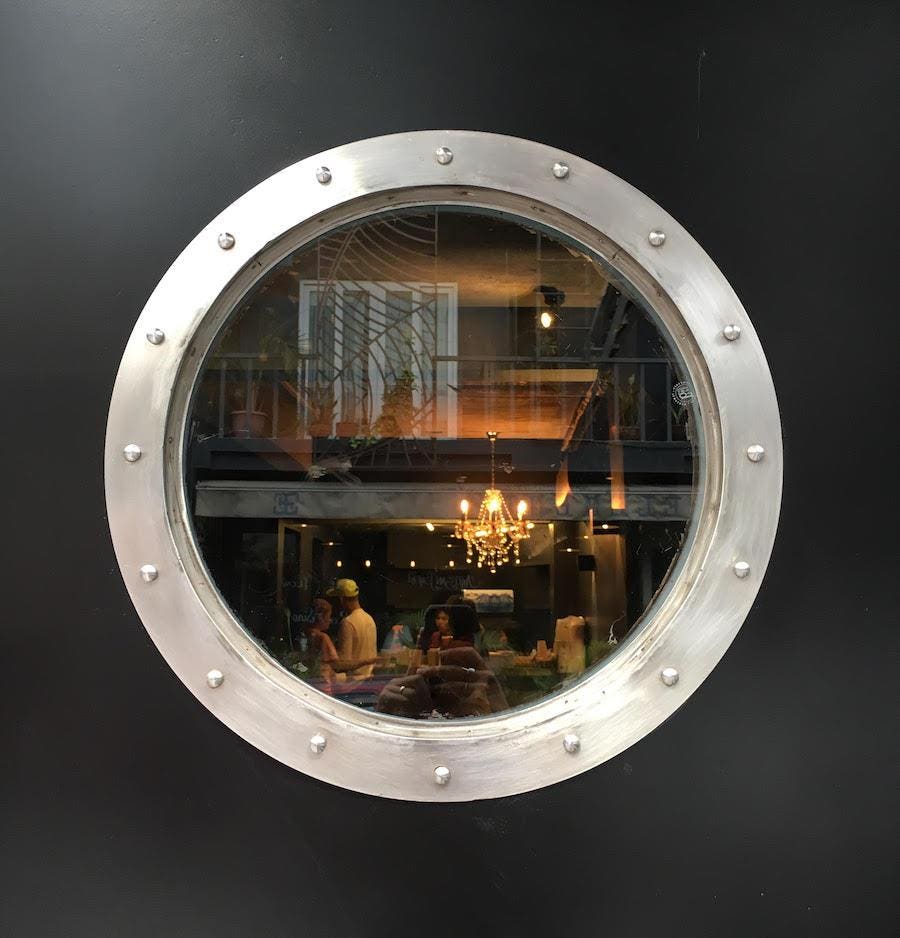 “The youngest bar on this list, Limbo has distinguished itself in the Manila nightlife scene by taking art as seriously as it takes its drinks. Calling itself a ‘midnight gallery and bar,’ you can take the art in while enjoying a cold beer.” 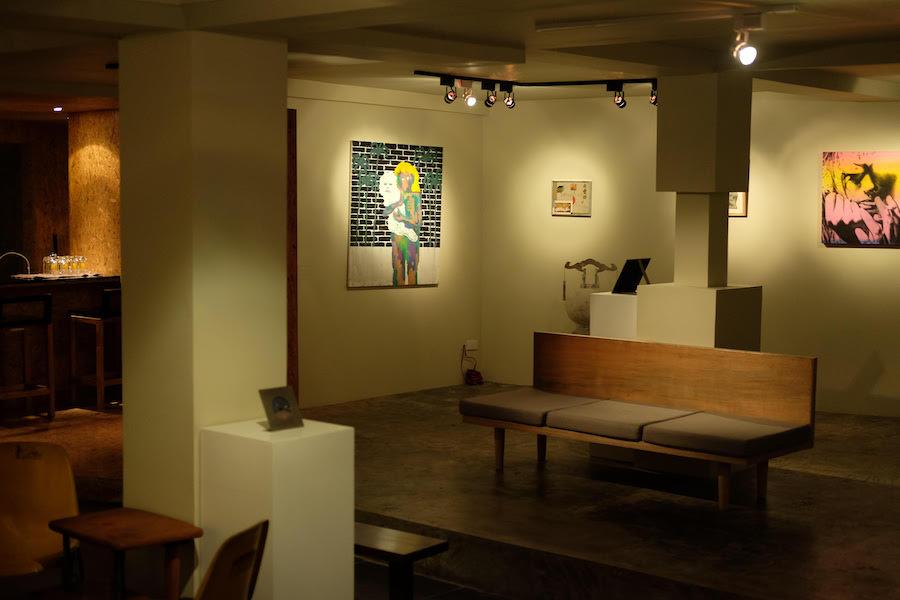 “Manila food scene wonder boy Bruce Ricketts has done everything from tacos (La Chinesca) to hole-in-the-wall sushi (Sensei) to great success,” Ang says. “But the Japanese-inspired Mecha Uma is perhaps his biggest showcase yet. On any given night, the talented Ricketts uses ingredients like cod sperm and sparkling firefly squid to ‘absurdly delicious’ effect.” 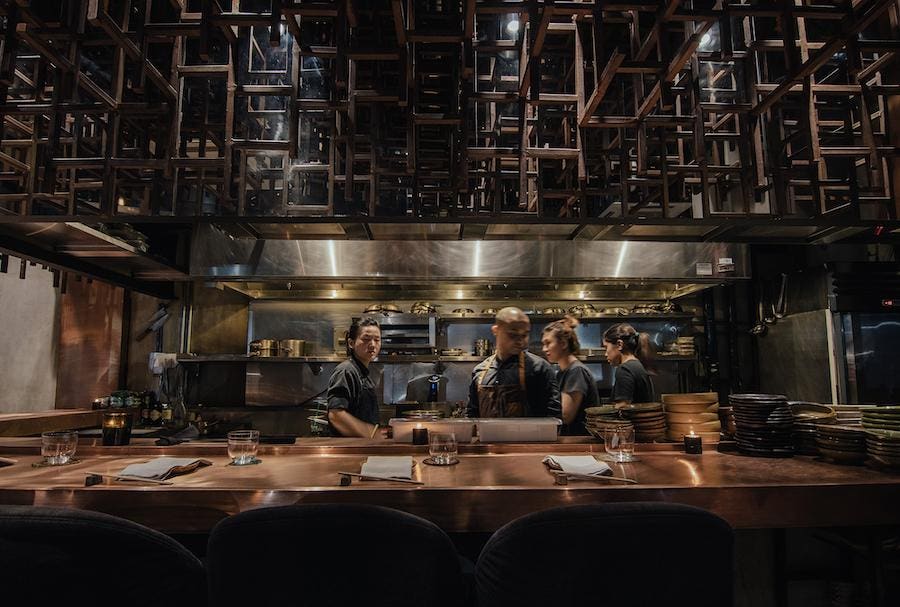 “Oto is one of the quieter corners of Poblacion’s energetic nightlife scene but there’s nothing sleepy about this place,” Ang says, “The cocktails are killer, the food surprisingly formidable, and the sound system almost shockingly good. It’s another cocktails-and-vinyl bar but this one’s especially good. It’s a great place to catch your breath after making your way through Poblacion’s more raucous offerings.” 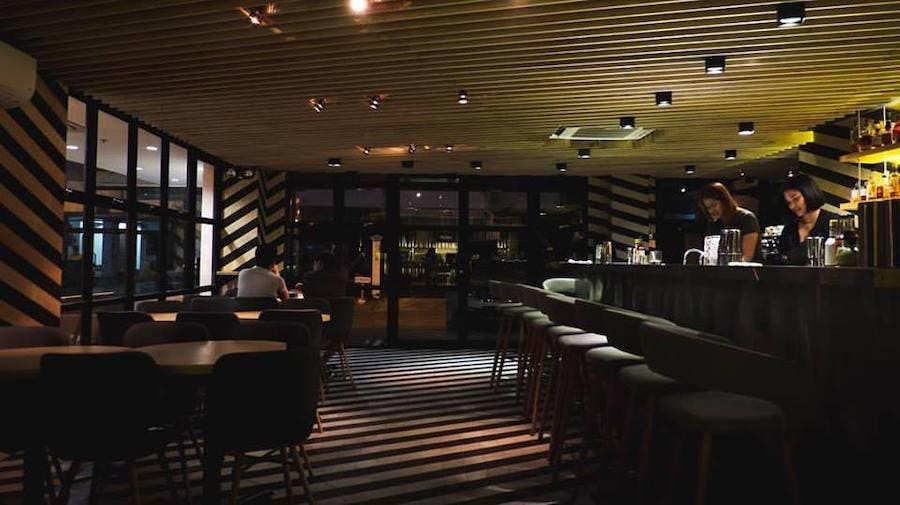 “One of the pioneers of the buzzy Poblacion nightlife scene, Tambai is a yakitori joint that splits the difference between Filipino street food and the Japanese yakitori tradition,” Ang says. “And while bars in the neighborhood have come and gone, Tambai has managed to stay top of mind through expansions like the oyster bar called Wantusawa and the cocktail bar Kampai.” 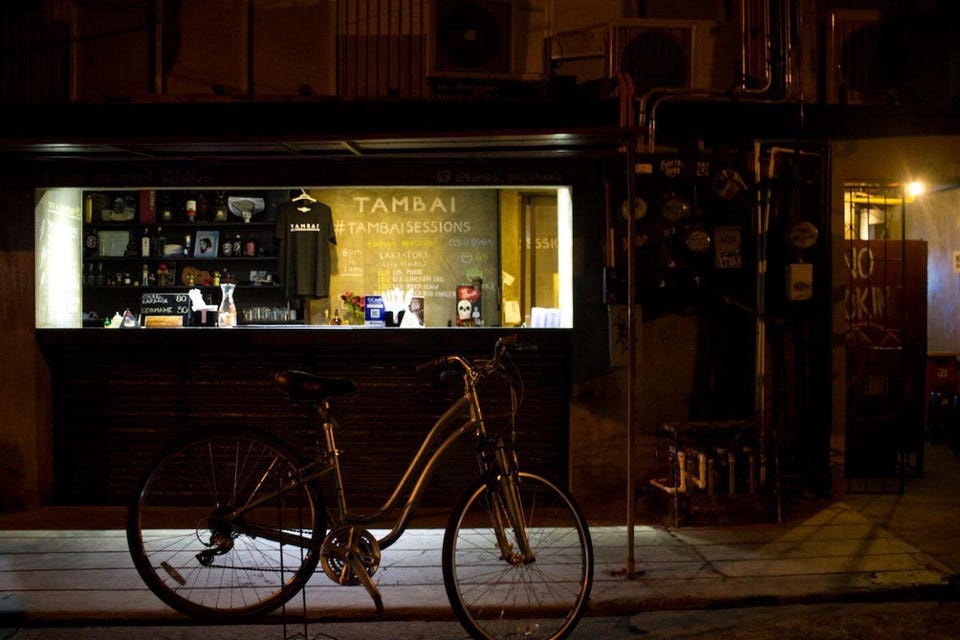 “The Asia’s 50 Best Restaurants list gave Toyo Eatery the ‘One To Watch’ award last year for transforming typical Filipino food and experiences into award-winning fine dining dishes,” Ang says. “But don’t let that bona fide fool you, Toyo is casual and homey. And if you’re lucky, one of their servers will break into a spirited version of the Filipino folk song ‘Bahay Kubo.’ Their signature salad, which uses all 18 vegetables mentioned in the song, is named after it.” 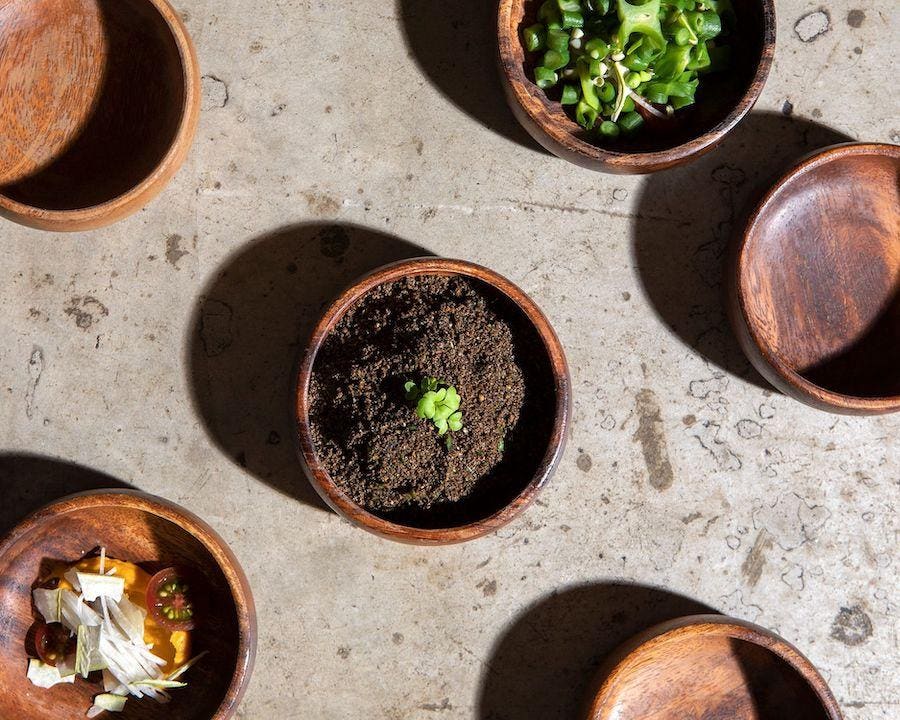 “The Curator has been on the Asia’s 50 Best Bars list for three consecutive years now. But this neighborhood favorite never lets ambition and vision get in the way of warmth and friendly service,” Ang says. “Whether you’re stopping by for a potent Americano on the way to a meeting or ending your day with one of their signature cocktails, The Curator has become an integral part of its community, which is perhaps a kind of award in itself.” 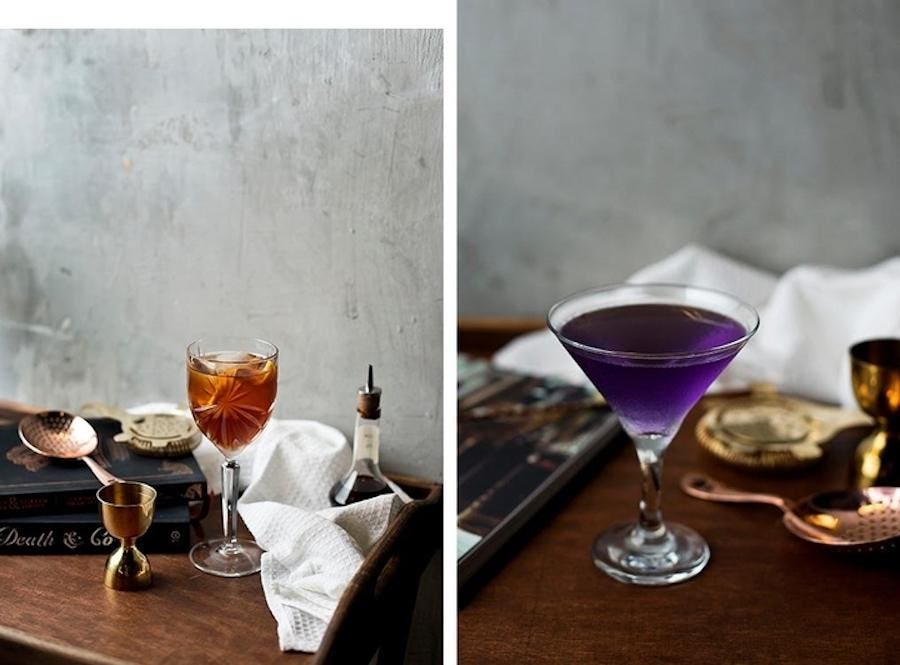 “Bon Appétit and Conde Nast Traveler sang praises for this neighborhood joint’s Pan-Asian cuisine. Here’s a pro tip: Every meal will make for a good time at Your Local. But Sunday brunch—when they swing open the door linking the restaurant to its sister cafe Yardstick Coffee—is especially pleasurable. Enjoy that salmon donburi with cold brew from Yardstick, all while a selection of classic ’60s and ’70s soul soundtracks your meal.” 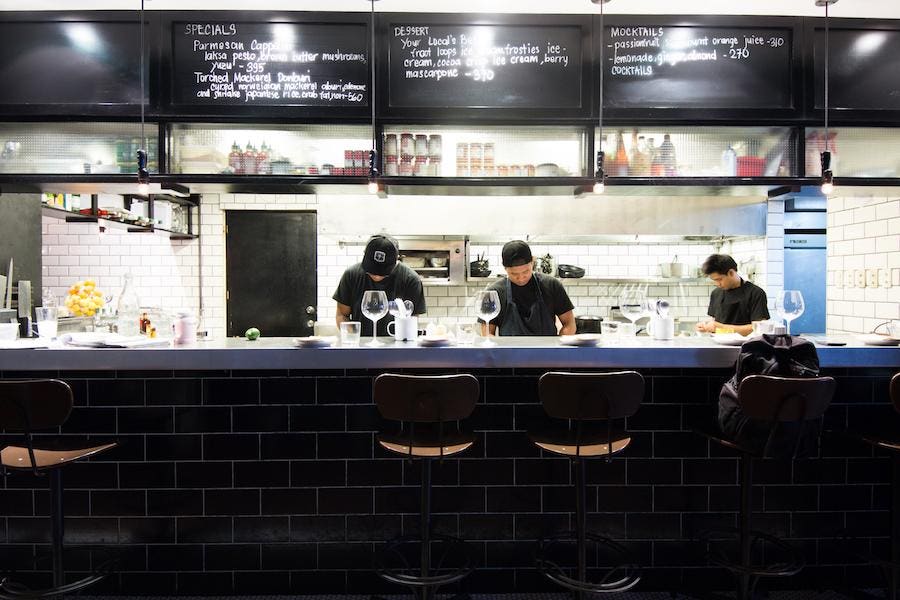 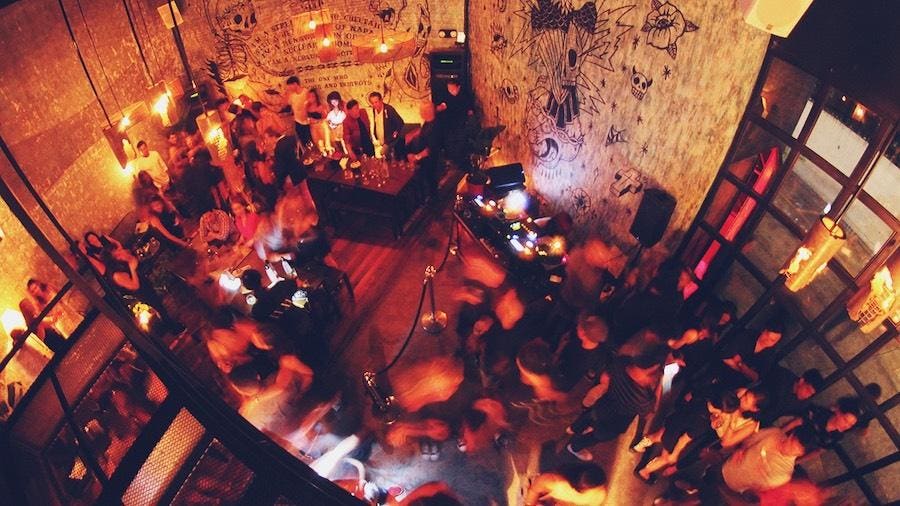